Get creativity stuck in your head! 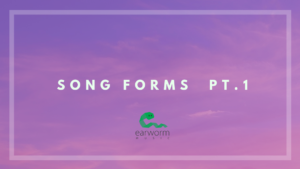 Hey, let’s chat about something you don’t often hear about in depth – musical structure.

Everybody is familiar with the terms verse and chorus, some of you will also know bridge and pre-chorus and some will even be familiar with assigning letters to each different section, such as A, B, C and so on, but their purpose and how best to string them together often seems to be a bit ‘hit and miss’. I suppose we had better start by saying that there are six commonly used forms in music.

I’m not dismissing all others, but simply giving a framework to base them on.

When we write a song we’re trying to communicate an idea – not just a lyric and a story, but also a feeling provided by the combination of music and words. If you were attempting to tell a story about a man who was frantically searching for his keys, you might try to reinforce the frustration (we’ve all experienced it) by singing fast and rapid-fire lines while musically switching to a new section at an odd time in the song, just as he would be changing direction after looking in the same places over and over again.

Another thing to keep in mind is the rhyming scheme. For example, if you rhyme the first two lines “I love my fat orange cat, sometimes he wears a purple hat”, then the first two lines of the next ‘A’ section need to follow the same type of rhyme, but not necessarily the same sound, “Breakfast was just toast and jam, for lunch I think I’ll have clam”.

So, to try and understand how the sections of a song can impact the way the story is told let’s look at First Form. At first glance this is the simplest from of all because it’s just the same section over and over. Same chord progression and melody (maybe some subtle changes for each time around); however this can make it difficult to pull off. Not only does the story need to be interesting and develop throughout the song, but the title still needs to be in the prime location so that it is remembered. Typically this is in the first or last line of a section and in this form has a name for the more common-place end line – refrain.

Another thing to keep in mind is the rhyming scheme. For example, if you rhyme the first two lines “I love my fat orange cat, sometimes he wears a purple hat”, then the first two lines of the next ‘A’ section need to follow the same type of rhyme, but not necessarily the same sound, “Breakfast was just toast and jam, for lunch I think I’ll have clam”. This form originates from the 1930s when songwriters were like factory workers and would sit in a small room, working nine to five, cranking out song idea after another and when they came up with a good one they would run next door to the publisher who would then tell them to finish it. The first part they came up with is the bit that would be repeated and played on radio. This became known as the chorus, whereas the ‘rest of the song’ was the verse or the set up to the story. This part usually wasn’t as catchy, memorable or even the same tempo, so was often dropped before it reached the general public.

Examples from that era are Cole Porter’s “I get a kick out of you” and Hoagy Carmichael’s “Stardust”. 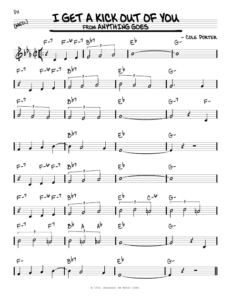 Second Form uses the verse and chorus to drive the song. This is used a lot in rock (with catchy guitar riffs), urban and folk. The chorus is the section that repeats throughout the song and is the memorable ‘singalong’ part, typically with the title in the first or last line. It contains the main idea of the lyrics and the main hook or riff of the song. The chorus chords and melody would normally remain the same on each repetition as would the verse. The verse fleshes out the idea and explains a lot more detail and although the lyrics change for each verse, the rhyming scheme remains the same, again not the same rhymes but the same format. A typical layout for a song in second form is Verse (V), Chorus (C), V, C, Instrumental, C with the chorus repeated until the end. If the songwriter has more to say they usually wouldn’t add a verse after the instrumental, but rather add a second verse before the first chorus – V, V, C, V, C, Instrumental, C, C, C.

Examples of rock songs that use second form are Rolling Stones’ “Satisfaction” and “Maybelline” by Chuck Berry.

When writing any form of song it is important to pace your lyrical ideas so that there is a sense of story with a number of stages. This doesn’t necessarily need to line up with different sections like the verse or chorus. A story that really pulls you in has detail and explains everything before the end of the song so that you’re not left wondering about what happened or why.

Next month we will look at two of the most popular forms, Third and Fourth, and how they add sections to expand the story.

Missed something? Click here for all three articles in the series.

Sonic is the author of two very dry books on Scale Fingerings for Bass Guitar.
He is also an in demand session musician and educator.


Bass On My Song